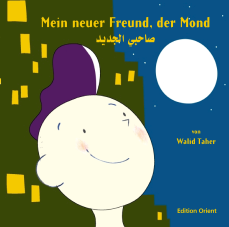 I have been interested in Arabic children's and youth literature for more than twenty years. I am looking for excellent children's literature from the Arab World which should be interesting to a German speaking audience and I translate children's books from Arabic to German. The first such book in my translation was also historically the first Arabic children's book from the Arab World which appeared in translation in a German publishing house. It appeared 1994 at the German publishing house Edition Orient with the title: Die Stadt, wo man sagt: Das ist wunderschön. When translating picture books for children, I always keep an eye on the quality of the illustrations and on the delicate relation between text and illustration.

I have good contacts to Arab authors, illustrators and publishers and to German speaking publishers of children's literature. I am a member of the German association of literary translators Verband der Literaturübersetzer VdÜ, the Deutsch-Arabische Freundschaftsgesellschaft DAFG, the Deutsch-Jemenitische Gesellschaft DJG, and of the Association for Children's and Youth Literature Arbeitskreis für Jugendliteratur AKJ, which is the German Section of the International Board on Books for Young People IBBY. 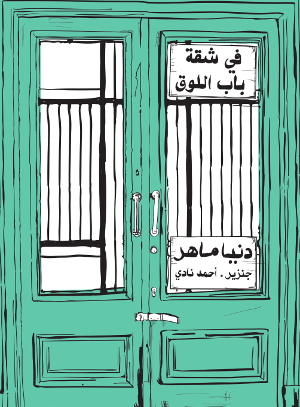 Lately I have begun to translate illustrated literature for adults from Arabic to German: On behalf on the Goethe-Institute Cairo, I have contributed to a German-French publication project as follows. I have translated comics from Arabic by Messaha (Irak) and by Ahmed Abd El Mohsen (Egypt) and I have translated a comic from English by Flyin' dutchman (Jordan). The translation of the graphic novel Die Wohnung in Bab El-Luk (The Apartment in Bab El-Louk) by Donia Maher (Egypt) is also a part of that publication project. I have translated the first part of this graphic novel from Modern Standard Arabic to German; this part has innovative illustrations by Ganzeer (Egypt). The much shorter second part, which is written in Egyptian dialect and has illustrations in the style of a classical comic strip by Ahmed Nady (Egypt), was translated by Rafael Sanchez in close consultation with me. In his review The Case of the Arabic Noirs in The Paris Review Jonathan Guyer calls the book The Apartment in Bab El-Louk a hard boiled graphic novella. In her Blog Arabic Literature (in English) Marcia Lynx Qualey has an interview with Ganzeer: Ganzeer on the Visual Language of The Apartment in Bab El-Louk. Marcia Lynx Qualey describes The Apartment in Bab El-Louk as a fabulous noir poem and Ganzeer remarks: Donia's text [...] could not be categorized as a novella, because you don’t have that kind of narration that is typical of stories. It reads more like a reflective prose of some sort. Which I feel required a similar visual language to match it, and one in which the text would be very much be a part of the image. The Arabic original appeared in 2013 at Dar Merit, Cairo, and won 2015 the Kahil Award for Best Graphic Novel. In 2017 its English translation by Elisabeth Jaquette appeared as The Apartment in Bab El-Louk at Darf Publishers, London. Marcia Lynx Qualey has reviewed this English edition. Maja Ueberle-Pfaff has translated this review into German, replacing citations from the English translation with citations from the German translation which was done for the Goethe-Institute. I essentially agree with the review of Marcia Qualey. But I want to add that the format of the book in its English edition is much smaller than the format of the original (thus the English edition has many more pages than the Arabic edition), and that the lettering of the two editions is very different. Unfortunately, in many cases these changes destroyed the subtle connection between text and illustration which is typical for the original.

In 2017, my article about Arabic Children's Literature: Between Tradition and Modernity appeared in Spanish and French translation in issue 55 of the bilingual political journal Afkar (ISSN 1697-0403). This journal is edited by the Institut Européen de la Meditérrranée (IEMed) and appears in a Spanish version as Afkar/Ideas and in a French version as Afkar/Idées. This is the Spanish translation of my article: Entre tradicion y modernidad. And this is its French translation: Entre tradition et modernité. According to IEMed, Afkar is a quarterly journal aimed at providing ideas from a regional approach for the neighbourhood between the two shores of the Western Mediterranean and at promoting debate on the future of societies and Maghrebian and European countries in particular. Joint publication with Estudios de Política Exterior (Madrid).

In January 2011 my article on Arabic Children’s Literature Today: Determining Factors and Tendencies appeared at PMLA, the journal of the Modern Language Association of America. (Download of this article from the website of PMLA is restricted to institutions with a subscription of PMLA. Many universities in the USA and abroad have got the permission to download)
My article Arabic Children's Literature Today: Determining Factors and Tendencies can also be downloaded from the website JSTOR (JSTOR provides access to more than 12 million academic journal articles, books, and primary sources in 75 disciplines).
If you have problems with downloading this article, contact me, and I will send it to you.
This article was used for example in the course Writing for Children by Yasmine Motawy, which took place in Spring 2012 at the Department of Rhetoric and Composition of The American University in Cairo.

I have worked for leading Arab publishing houses like The Arab Institute for Research and Publishing (Beirut and Amman) and Dar al-Shorouk (Cairo).

Short descriptions of Arabic books I recommend for translation into German can be ordered by publishers interested in obtaining the rights. I present the books at the following pages (in German):

Several of these books are suitable for different ages. For some, a preliminary translation into German or English is available.

You can find more about those books which have already appeared in my translations from Arabic into German in the German part of my Web site.

This is my recommendation list of children's books from the Arab World which have been translated from Arabic to German (in German). 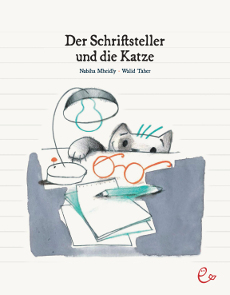 The Society, registered as a non-profit association in Frankfurt, has set itself these objectives: to monitor literary trends and developments and select the best examples of creative writing from Africa, Asia and Latin America for translation into German, and to promote them in Germany, Switzerland and Austria by encouraging contacts between authors and publishers from the Third World and those in the German speaking region; to serve as an information centre and clearing house about literature from Africa, Asia and Latin America; to help establish and encourage a forum of debate about Third World literature. (from litprom.de)

In the publishing house Edition Orient in Berlin four bilingual Arabic-German children's books have appeared with my translations from Arabic into German. The stories are by Fauziya Raschid (Bahrain), Fuad Qa'ud (Egypt), Samira Schafik (=Samira Shafik) (Egypt), Walid Taher (Egypt) and Rania Zaghir (Lebanon). They are illustrated by Fuad al-Futaih (Yemen), Racelle Ishak (Lebanon), Ihab Schakir (=Ihab Shaker) (Egypt) and Walid Taher (Egypt). These books are suitable for Arab and German children alike and they are often used in classroom for German speaking learners of Arabic and for Arabic speaking learners of German. While they are primarily made for the amusement of children, they are useful for adult learners of foreign languages as well. For the prices in Germany, see my list Arabische Kinderbücher in deutscher Übersetzung (in German).

In November 2016 I was invited to the 13. Hamburger Märchentage (Hamburg Days of Fairy Tales) which had the main subject Märchen aus Arabien (Fairy Tales from the Arab World). I read from my translations and a gave the talk Kinderbücher aus der arabischen Welt in zweisprachigen Ausgaben, nicht nur für arabische Kinder (Children's Literature from the Arab World in bilingual editions for children in Germany). The talk took place in the children's library of Hamburg Kinderbibliothek Hamburg (Kibi) and the audience were librarians, educators and teachers.

In May 2013, I gave the talk Nicht nur für Migrantenkinder: Zweisprachige Bilderbücher aus dem Arabischen(= Not only for children of migrants: Bilingual picture books translated from Arabic ) at the International Congress Multilinguism creates opportunities - continuity in education and training , which took place in Saarbrücken, Germany.

In November 2011, I took part in the workshop Umgang mit Kinderliteratur im Klassenzimmer: Fragen nach Mehrsprachigkeit und Übersetzungen (Children's Literature in the Classroom: Multilingualism and Translations) of the faculty of German Studies at the Unversity of Siegen. I gave a talk on Zweisprachige Bilderbücher aus dem Arabischen: Ein Bericht aus der Praxis einer Übersetzerin (Bilingual Picture Books, Translated from Arabic: Experiences of a Literary Translator). The workshop has been organized by Gesa Siebert-Ott, Jana Mikota, Sabine Planka (all from the Unversity of Siegen). 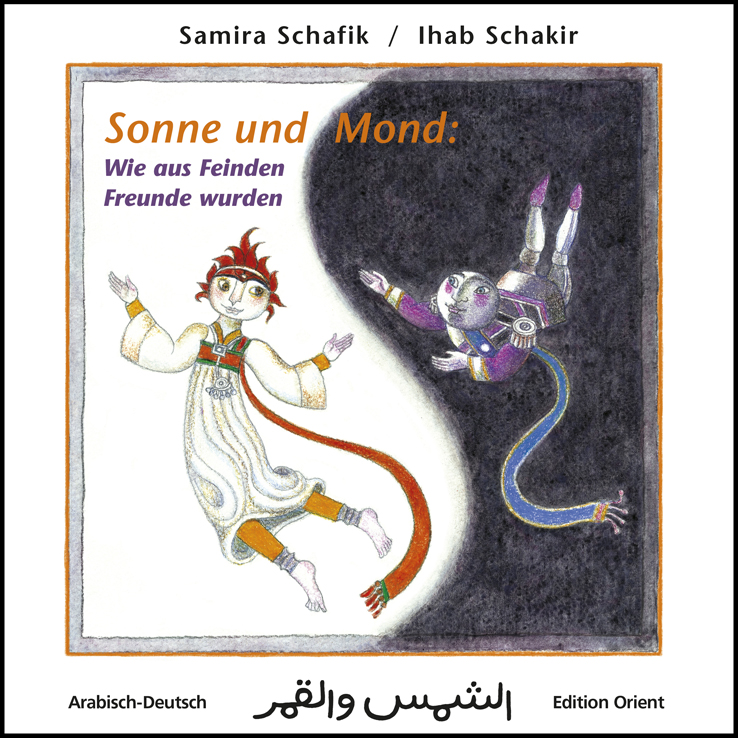 In September 2010 in Marburg, I gave a talk on Arabic children`s literature and its translation into German at the 31. German Congress of Oriental Studies (DOT) in the section Arabic Language - Literary Translation. This talk was supported by the Deutscher Übersetzerfonds.

Apart from my interest in Arabic children's literature I am a Ph.D. student at the group for Computational Linguistics of the Department of Language Science and Technology of the University of the Saarland in Saarbrücken. My research interests for my Ph.D. are in the area of logic and formal semantics of natural language. The subject of my thesis is On the Foundations of Temporal Discourse Representation Theory.

In 1989 I got a degree in physics from the faculty of physics of the Johannes Gutenberg Universität Mainz: I am Diplom-Physikerin. A Diplom is roughly comparable to a Master of Science. My diploma thesis was written in the group for Theoretical High Energy Physics (ThEP) (formerly called: Theoretical Elementary Particle Physics) at the chair of Prof. Martin Kretzschmar about a subject of mathematical physics, namely Der Dirac-Operator über semiriemannschen, raum- und zeitorientierbaren Spinmannigfaltigkeiten von beliebiger Dimension und beliebigem Index. I still like it.

And I have worked as data base administrator for ADABAS and system manager in a VAX cluster of 50 machines at Hottinger Baldwin Messtechnik (HBM) in Darmstadt. HBM is now part of Hottinger, Brüel and Kjaer (HBK). Today I am reduced to system management on my own computer, but I always like the adventure when I update to a new linux version.

I learned about the beauty of the Arabic language at the then Seminar für Orientkunde of the Johannes-Gutenberg-Universität Mainz. My teacher was Prof. Heribert Horst, who advised me to read a lot. I am still following his advice.